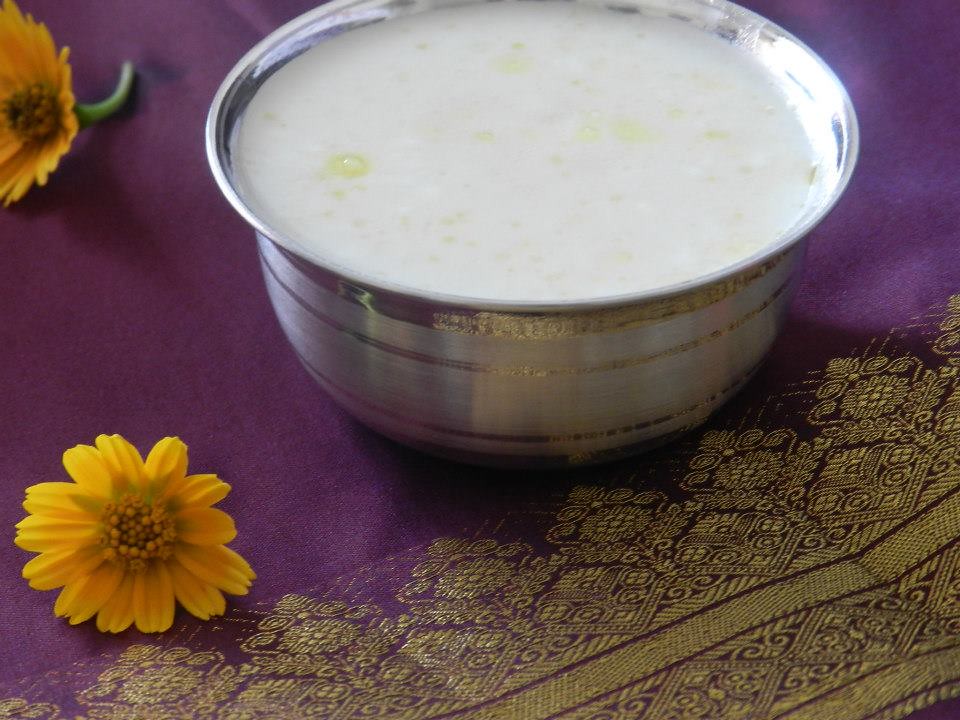 Pañcāmṛta (Panchamrita) is a sweet syrup made by mixing five ingredients i.e. Milk, Yoghurt, Honey, Sugar and Ghee in equal amounts. The word “Panchamrita” is a combination of two words, “Pancha” means “Five” and “Amrita” means “Sweet Nectar”. According to Hindu mythology, Panchamrita is generally used to bathe the idols during puja. It is also named as “Charanamrit” in some places of India. According to mythology, the five elements of this sweet concoction have symbolic meaning. Milk represents purity, Yoghurt gives us strength, Honey depicts unity because it is prepared jointly by bees, Sugar adds sweetness and Ghee is meant for nourishing the body. 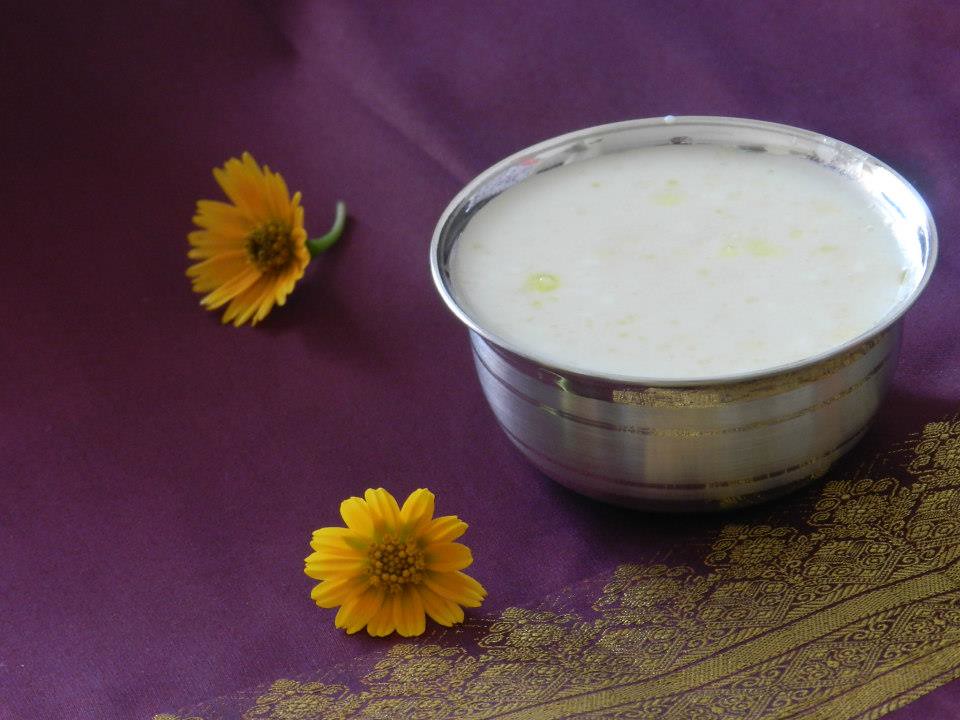 I recently had an interesting discussion with Vinay regarding the significance of performing a puja. We’re on the inquisition about rituals and the meaning behind them. He opined that our ancestors have coined certain traditions in the past keeping specific reasons for each and every ritual performed. But there is a sad truth; as these traditions were handed over to subsequent generations, the meaning has been totally erased and forgotten and nobody ever questioned to know the significances of the traditions. 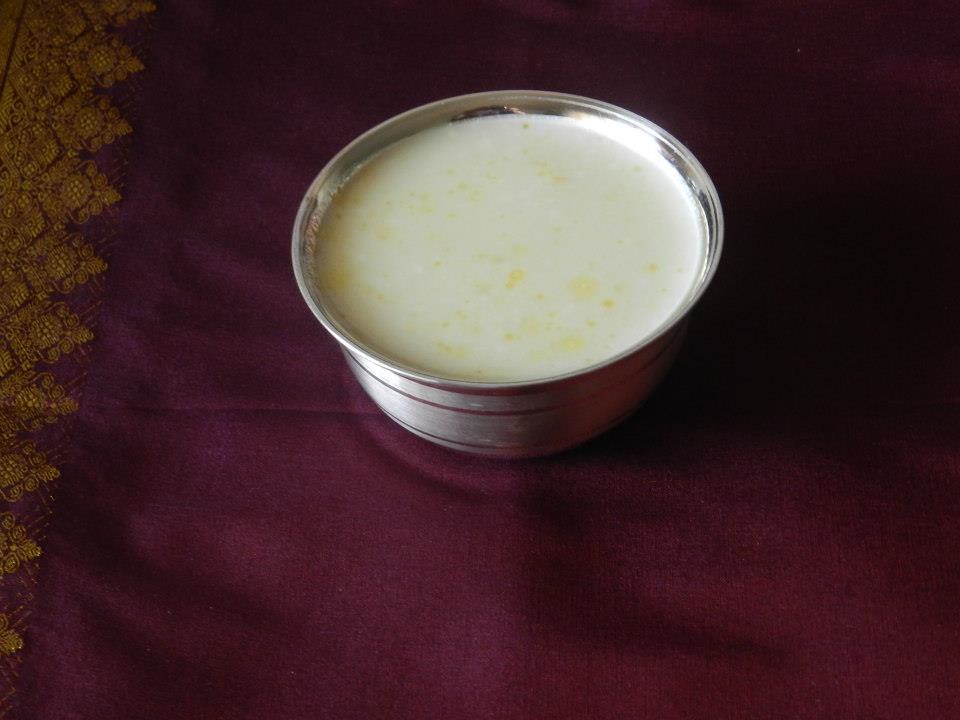 Both of us have always asked for answers with elders, but in vain. The idea about the origin of traditions is completely lost. I just wish the meaning and significance was retained, so that we could understand what were our ancestors thinking when they came up with such laborious traditions. Was there any practical explanation for these things? Or was it just a blind belief? We haven’t heard any answers for these questions ever! 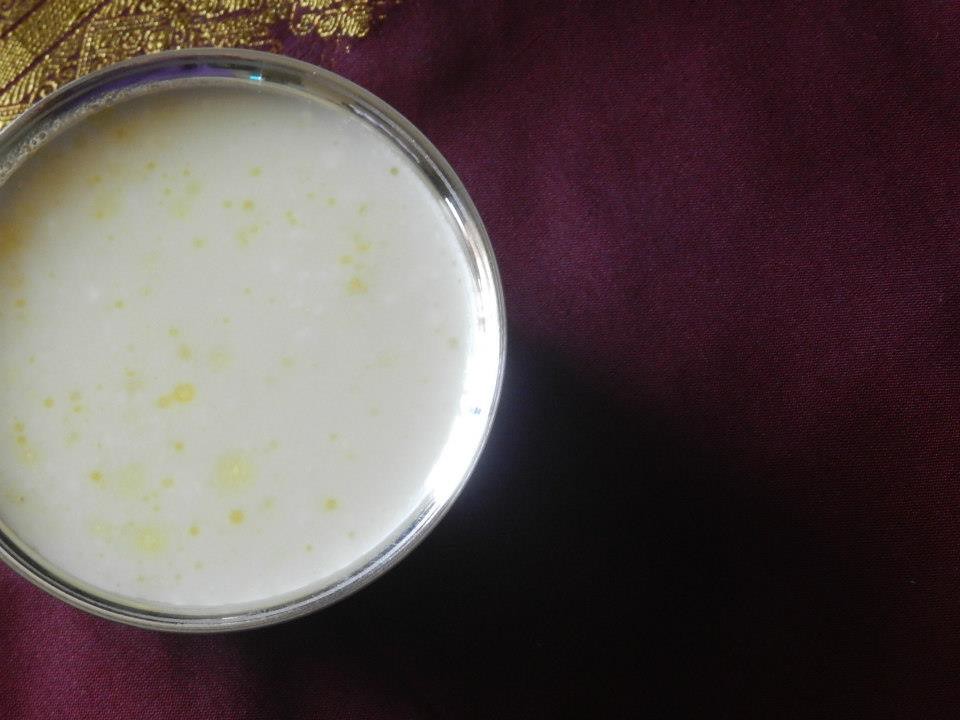 Preparation of Panchamrita is also one such wonder. It tastes so wonderful, I just cannot imagine what made our ancestors come up with such an exotic and tasty sweet. The origin of the recipe is what I started looking for. 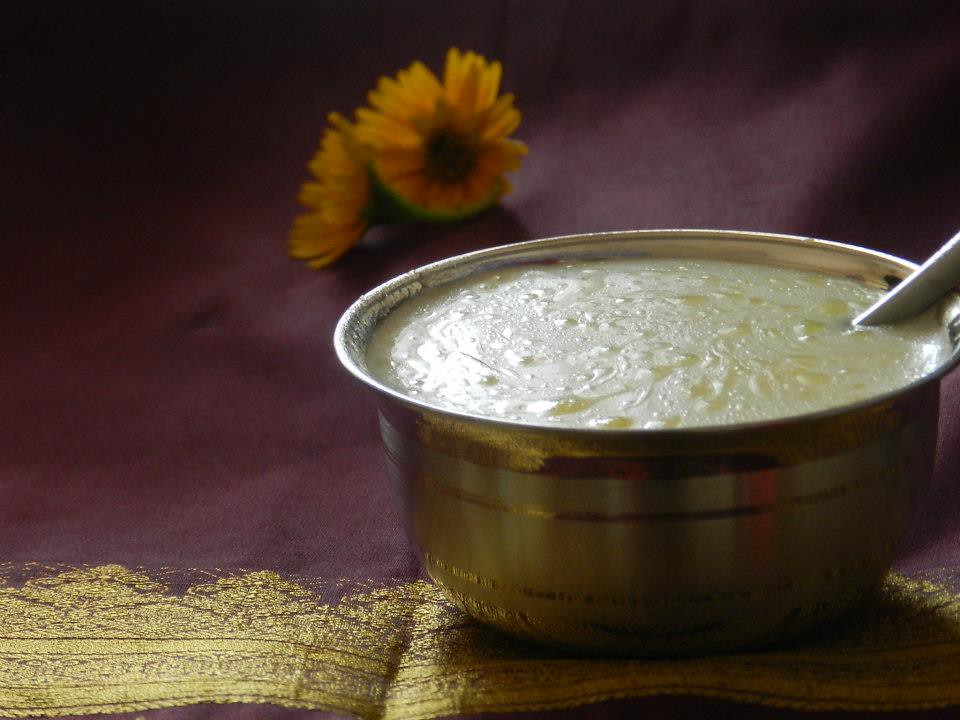 One can find that the origin is written beautifully in a story / episode of Mahabharata named as “Samudra Manthan”. This part of Mahabharata is one of the very popular episodes in the epics. An evening when Vinay and I read the story, we were entertained with a slight humour that is inculcated in the story. Yet, I found that the preparation / ingredients of “Panchamrita” has not been mentioned in this episode, instead, the significance of this nectar has been glorified very well. “Samudra Manthan” is a process of churning of the ocean milk.

According to the legend, Panchamrita is called as “The Nectar of Immortality”, which means that anyone who would take a sip of this sweet syrup, they would attain immortality. Very fictitious isn’t it? :) 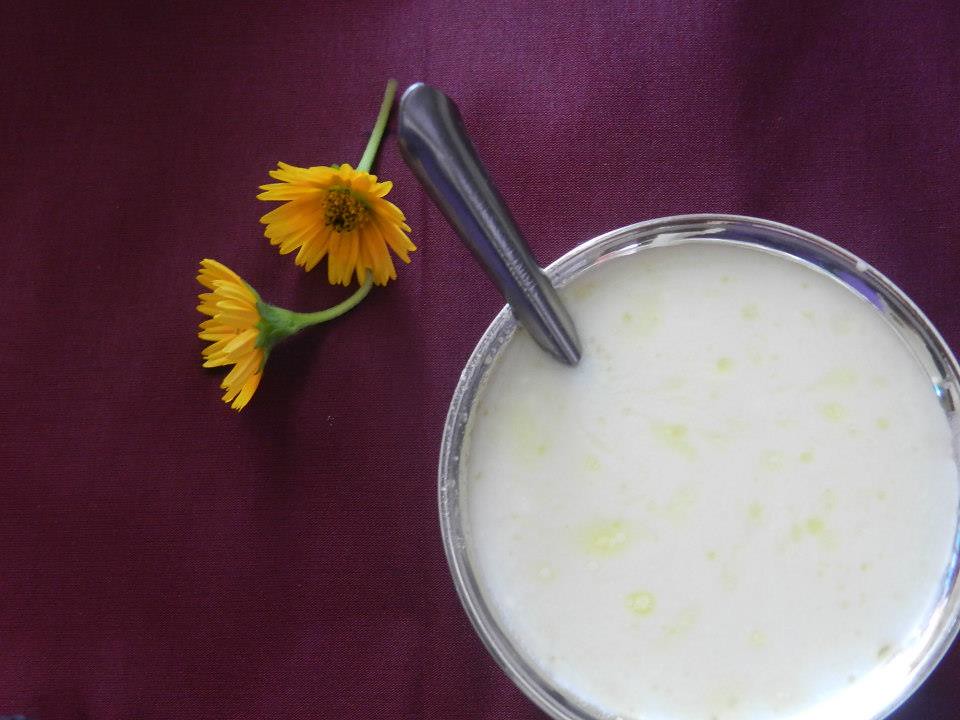 The Story of Samudra Manthan (Reference from Mahabharata: Section XVIII of Astika Parva)

Lord Indra was on an elephant ride when he came across Durvasa, a sage, who offered him a garland. Lord Indra accepted the garland and tucked it to his elephant’s trunk. The elephant was unable to withstand the fragrance of the garland and hence did away with the garland. Durvasa was enraged by the scene and told Lord Indra that it was a garland that would bring wealth and strength to him. Durvasa then cursed Lord Indra and all devas (the good people) that they should be deprived of strength and wealth. Following this incident, the devas lost their battle against the demons (the bad people) led by Bali and lost all their strength and wealth as well.

The devas sought advice from Lord Vishnu who suggested that the demons had to be tricked if the devas had to get back their lost powers. Vishnu suggested that the devas should form an understanding with the demons that they (devas and demons) will jointly churn the ocean milk (On which Vishnu sleeps) and extract the “Nectar of Immortality” and share the sweet nectar amongst themselves. But Vishnu gave his word that he will ensure that the nectar is benefited by the devas alone at the climax.

The devas then collaborated with the demons and decided to churn the ocean of milk together and enjoy the final benefits. In order to the churn the ocean milk, there was a need of a large churning rod and a large churning rope. They decided to use the mountain Mandarachala as the rod and the serpent Vasuki as the rope. Vasuki is known to be the king of serpents. On the advice of Lord Vishnu, the devas decided to hold the tail of the serpent and the demons had to hold the head.

They began the churning process. The serpent Vasuki released a lot of poisoned fumes from its mouth as a result of which many demons, who were holding the head, were poisoned. Still unperturbed, the demons and devas continued the churning process and this made the mountain rotate and the ocean milk began to churn. This process is popularly named as “Samudra Manthan”.

Now comes the release of the “Panchamrita”. This part of the story is the main highlight of how the devas acquired their lost powers.

During the churning process, there emerged Dhanvanthri (Supposed to be known as the God of Ayurvedic Medicine) with a pot in his hand that contained the nectar. The demons and devas were hassling with each other to get an opportunity just to have a sip of the nectar and attain immortality. In the split of a second, Garuda, the divine bird, snatched the nectar pot and flew away with it. Rahu, one of the demons,somehow got hold of the nectar pot. The devas were terrified with the scene and sought help of Lord Vishnu.

Lord Vishnu disguised himself as Mohini, who is said to be a very beautiful and elegant woman. She distracted the demons and took away the nectar pot from them and gave it to the devas. The devas drank the nectar. Amidst this scene, Rahu disguised as one of the devas and drank the nectar as well. The switching of sides of Rahu was observed by the Sun and Moon Gods, and they informed Mohini about this. Mohini wanted to kill Rahu before the nectar could pass through his throat. She cut off his neck with her Sudarshana Chakra (A Sharp blade like wheel). But he had already swallowed the nectar and hence he did not die. His body was in two parts from then, his head has been called as Rahu and body as Ketu.

In the end, the devas who got back their powers, defeated the demons, and remained immortals thereafter! 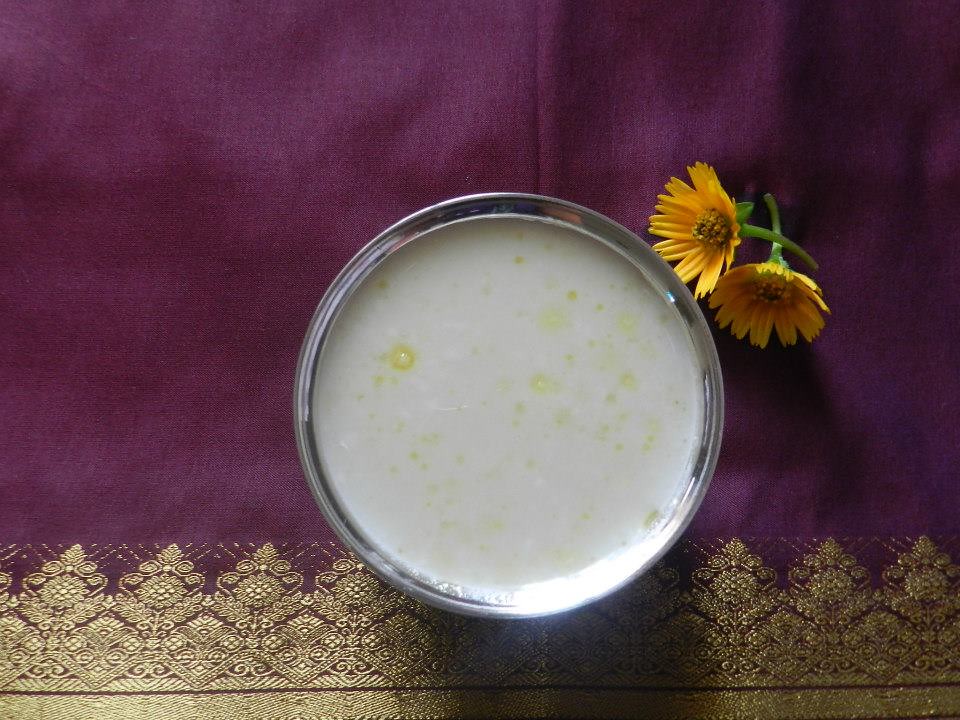 The preparation has not been mentioned in this story. But then, the significance has been beautifully covered by the author. I was mesmerized by the whole plot. I still wonder how many such stories are present throughout this wonderfully written epic.

Panchamrita is a simple combination of five ingredients i.e. Milk, Yoghurt, Sugar, Honey and Ghee. It is supposed to be originated from the epic "Mahabharata".

Mix all the above mentioned ingredients and stir well. Your sweet concoction of Panchamrita is ready to be sipped.

Remember: This is not to be served in big quantities. The above preparation can be shared among 3 to 4 people.

Always keep in mind that Pañcāmṛta (Panchamrita) is only meant for rituals and pujas to bathe idols and not meant to be consumed in large quantities. Still if you feel the need to have more of it, following recipe would be of help. I would still stress on keeping up to the original recipe and using it only on auspicious occasions.

Mix all the above ingredients well and serve chilled. 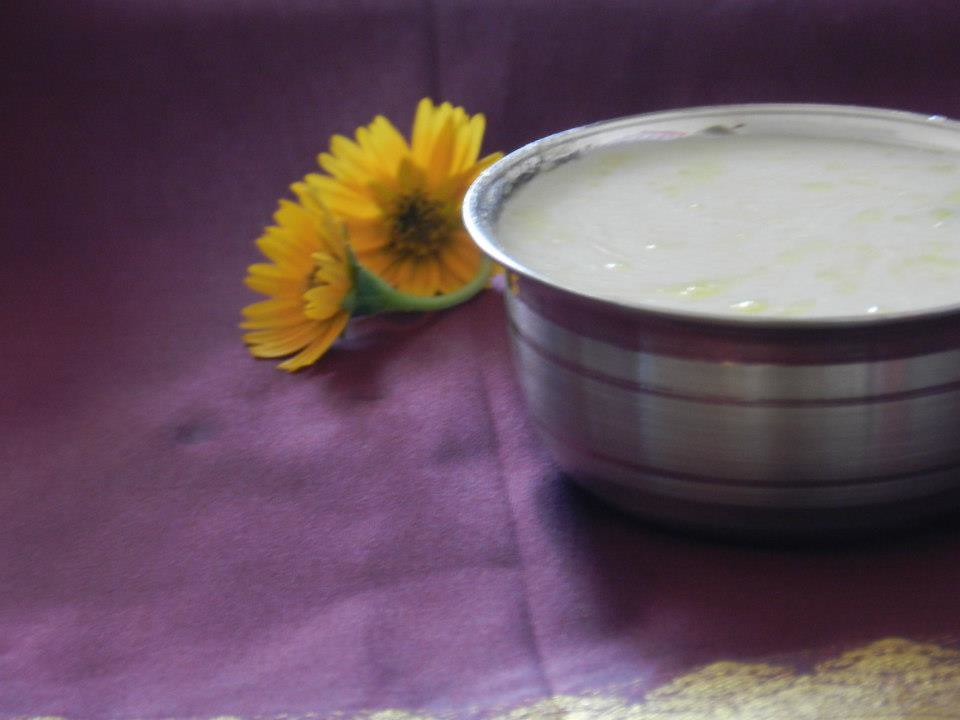 25 Responses to Panchamrita (A Sweet Syrup)